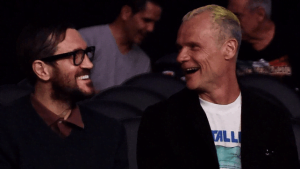 Alt Nation reports that for the first time since he stopped performing with Red Hot Chili Peppers back in 2007, guitarist John Frusciante was spotted with one of his former bandmates.

The musician in question is Flea, the bassist. The two lads have reunited to attend a boxing match at LA’s Staples Center, as shown in the photo above.

John had officially left the band in December 2009. His final gig with the boys took place on August 26, 2007 at the Leeds Festival in the UK. When RHCP was inducted into the Rock Hall in 2012, John declined to attend.