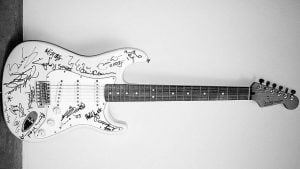 The most expensive guitar in the world is a white Fender Stratocaster from the Standard series. This stringed instrument was sold at auction for $ 2.8 million. That was 2.4 million euros at that time. There is so much money paid for the guitar because it suffices with signatures from famous guitarists. The auction took place on November 16, 2005 at the Ritz-Carlton hotel in Doha, in the kingdom of Qatar.

All the money from the auction went to projects to repair the damage of the terrible tsunami disaster on Boxing Day 2004. Then a very severe seaquake occurred in the Indian Ocean, causing a tidal wave with about 230,000 deaths as a result.

A member of the royal family of Qatar bought the guitar at an auction in early 2005 for $ 270,000. The original owner, however, donated the Fender for the auction of November 16, after which the record amount was reached. Within a year the Fender was auctioned twice.

The last buyer was Her Highness Sheihka Miyyassah Al Thani, heir to the throne of Qatar. Whether she can play guitar is unknown.